Mock Draft 2.0 - Picks Only (use other topic for discussion)

This is the forum for public mock drafts. To avoid any confusion, please do not post in individual draft forums of which you are not a member.
Post Reply
98 posts

With the 45th pick the broncos select...

Some of Denvers Interior lineman are getting a bit old so Denver is happy to inject a young talented Player like pouncey in the mix to learn and take over eventually.

With the 47th pick the New England Patriots select

With Welker hurt and Moss on the last year of his contract the Pats take another BIG WR to take the #1 Positiong from Moss when he's done, but also fill in some depth at WR and give their Franchise QB another Target to throw at. Looked at RB's, a big NT, and another LB, LaFell looked like the best value. would have taken him before Wotten, but there was a run of DE's and good pass rusher is harder to find then a good WR.

I was hoping to see Wooten here. IMO Carolina has three holes to fill in this draft - DL, QB and WR. Tate is more in the mold of Steve Smith (shifty, quick and similar frame) as compared to a big bodied WR that would be the preferred compliment, however, he's the most talented WR still on the board. Also it doesn't hurt to give young Matt Moore some targets to grow with. I expect some value @ DL in round 3 but Tate wouldn't have made it that far.

With the 49th pick the San Francisco 49ers selects

With the 50th pick in the 2010 NFL Draft the Houston Texans select:

Dixon adds the bruising power-back the Texans have been missing. The ripped 245lb Dixon is capable of pounding the rock to help balance a decidedly pass-heavy offense and can carry the load even if Slaton isn't ready or can't stay healthy as a complimentary player. Make no mistake: the Texans have a new feature back and his name is Anthony Dixon.

The Chiefs have so many areas of concern that this one is wide open. I went for the BPA among those positions. I think there will be good value picks later on for developmental O-line guys. All of the ones worthy of a 2nd round pick are gone at this point. Still...the Chiefs are excited to start the draft off with Eric Berry, Terrance Cody, and Eric Norwood. I would have selected Golden Tate had he still be available.

With the 53rd pick in the 2nd round the New England Patriots select:

Patriots need youth at the RB position and Gerhart is their guy. The Pats could will use him as their 2 down/goal line back, even full back at times. He's a hard working Bellichik type guy. Pats could look DT here, or may go best player available, who knows for sure with these guys.

With the 54th pick in the 2010 NFL Draft, the Cincinnati Bengals select Marshwan Gilyard, WR, Cincinnati. An upgrade has already been made at WR with Matt Jones, but the team does not feel very confident with Andre Caldwell at this point and will look to draft a nice slot guy. I expect the Bengals to wait on a nickel corner and LOLB until later in the draft and snag the talented Cinci wideout. Sorry for the delay. I was trying to find someone else for this pick, but I just kept coming back to him. Then I noticed that lung drafted him in our first run, so I tried to find someone else again. His value might very well be higher than 55th overall from what I've been reading about him. Gave consideration to DE, CB or even a big guy for the OLine, but a lot of the top DE's have been picked. Which leaves the Eagles getting very good value out of this pick... again.
GDF3
QB- Vick, Freeman, Hasselbeck, Yates
RB- Foster, McCoy, M Bush, Ben Tate, R Jennings, Alex Green
WR- Wallace, TBMW, Colston, Boldin, Collie, Amendola, Washington Roberts, Doss
TE- Gates, Cook, Carlson, Heap, Shiancoe
K- Cundiff, Novak
DL- Abraham, J Smith, James Hall, R Quinn, Keiser
LB- Poz, DJ Will, Vilma, Wake, Rivers, Mays, Irving
DB- Polamalu, Berry, Delmas, C Woodson, M Griffin, T Thomas, Byrd

bigcsr67
Player of the Year 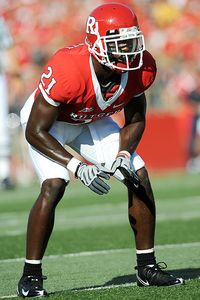 I was looking DB all the way here. Entering the 2nd round I was hoping Kyle Wilson or Dominique Franks fell to me, but..... they did not. McCourty is a nice pick up for the Pack.

thewhyterabbit
Player of the Year

with the 57th selection in the nfl draft, the Baltimore ravens select Rennie Curran OLB UGA

With the 58th pick in the NFL draft the Arizona Cardinals select:

The Cards are very excited to welcome their new franchise QB, as they officially stick a fork in the Matt Leinart Era, as the Whisenhunt management was never tied to Leinart and never that high on him in the first place. Colt McCoy will be aided by Fitzgerald and a strong receiving corps even without Boldin plus a stronger running game with Beanie Wells that McCoy can lean on early on in the season especially. They also really like the value here for Mcoy as they felt he would have been already taken early in the 2nd round at the very least.
“I had a couple of drinks. I started in 1970 and finished in 1985. It was a very big drink.” - Alice Cooper
“I’m sick to death of people saying we’ve made 11 albums that sound exactly the same. In fact, we’ve made 12 albums that sound exactly the same.” - Angus Young of AC/DC
"Every album Van Halen did was actually an Eddie solo album" - Eddie Van Halen
"Don't hate me because I'm fabulous" - Prince

Dallas needs to get younger at Safety and I think Burnett is the right choice here. He's a ballhawk and his ability should allow him to challenge Hamlin immediately for playing time (unless Hamlin gets cut).